While debates about Brexit raged in parliament, 13 volunteers took refuge at Common Wood where we spent the day improving the habitat for butterflies.

We gathered at Hillbridge at 10 o’clock on Monday 21 October.  Derek Collins seemed concerned that the Dartmoor Preservation Association’s ‘APY’ wagon had got rather muddy so, while we waited for everyone to assemble, he gave it a clean.  He keeps it in meticulous condition.

The group consisted of the Dartmoor Preservation Association conservation volunteers, with Simon Phelps and Megan Lowe from Butterfly Conservation’s All the Moor Butterflies project which aims to protect threatened butterflies and moths on Dartmoor, Exmoor and Bodmin Moor.

We set off along the leat to Common Wood.

Setting off along the leat

Claude Williams posed on the bridge with his brush-cutter.

Derek posted a notice by the leat so that people walking the footpath would know we were there.

Derek puts up the notice to inform passers-by

We set up base-camp under an oak tree and Simon and Megan suggested that we work on the western end of the site.  The aim is to remove bramble, gorse, hawthorn and blackthorn, but not bracken, to encourage the butterflies’ food plants: violets, betony, devil’s-bit scabious and bugle.  We want to lure Pearl-Bordered and Small Pearl-Bordered Fritillaries, and believe the latter have bred here.  We had worked on this patch before so there was not so much large growth to remove. 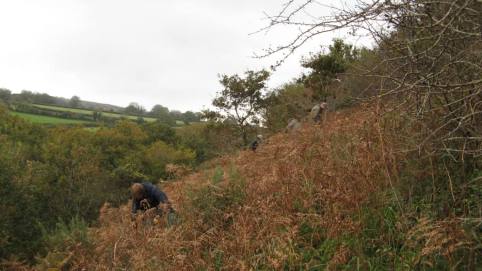 The slope as we start work, looking west

Nevertheless, it was hard work cutting away the brambles and gorse, but rewarding when it revealed plants which need to be accessible to the butterflies.

Betony among the brambles and bracken

After an hour or so we stopped for a coffee break under the oak tree, and Val distributed her delicious cake. 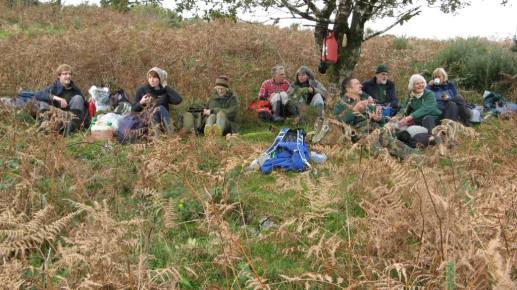 By early afternoon we could see the progress we were making.

We pulled our cuttings down the slope to the natural hedge, or windrow, which had been fashioned by Derek.

Derek and Sylvia Hamilton build up the windrow

Meanwhile, Claude had done his own thing with the brush-cutter.

Claude at work with the brush-cutter

making tracks through the gorse and bracken.  Tracks are useful because they will encourage animals to move about on the site, and to trample the vegetation.  Sometimes the owner of the field above Common Wood helpfully leaves her gate open so that ponies wander down.

A track cut by Claude

At about 3pm we finished work and headed down the hill, back to the real world. 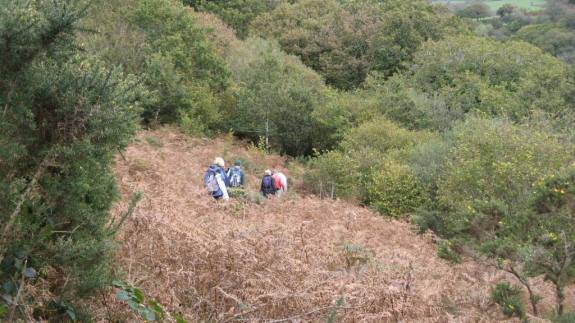 The volunteers had done a great day’s work.  We’ll be back in February.

We are very grateful to Campaigner Kate for permission to use her blog article.