On a bright and sunny autumn day, 22 October, 13 volunteers met in the front field at Hillbridge Farm near Peter Tavy on Dartmoor.  Megan Lowe and Simon Phelps from Butterfly Conservation’s All the Moor Butterflies project joined the Dartmoor Preservation Association conservation volunteers for a day at nearby Common Wood.

Meeting in the front field

As we walked through dappled light along the leat I pointed out to Megan that there could be no better journey to work.

The best-ever walk to work

Derek Collins posted our sign to show that we were at work here.

With bow saws and loppers we tackled the gorse, hawthorn and brambles on the site, leaving the bracken as this shelters the violets, bugle and scabious which are among the food plants for Pearl-Bordered and Small Pearl-Bordered Fritillary butterflies.

Here is how it looked when we started. 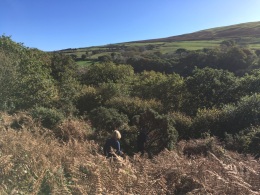 The vegetation was dense and tangled.  We had to cut down the gorse using saws and take off the smaller branches with loppers, prickly work in the surprisingly hot sun.

We came upon various features of interest, a useful excuse to stop work.

John Viant found an intricate bird’s-nest in a gorse bush; it probably belonged to a long-tailed tit.  It was made of feathers, bracken and moss. 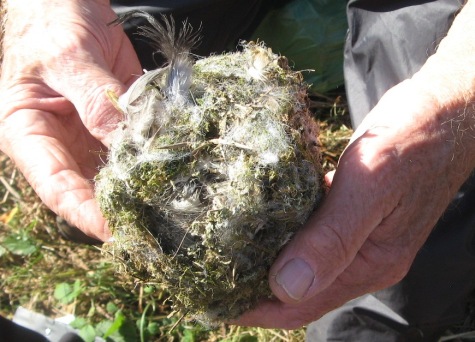 We had breaks for coffee and lunch.

While some of us sawed and clipped at the vegetation, others dragged it down to build up the windrow above the leat. 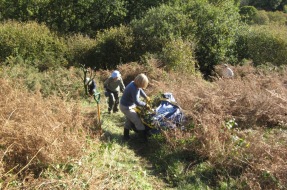 Sylvia Hamilton drags the brash down to the leat

At about 3 o’clock we surveyed what we had done and decided to call it a day.  We could see the difference we had made.  While there was still plenty of bracken there was much less gorse, and the windrow was a bulky bank of vegetation.

We plan to return in February.  As ever I am grateful to the DPA volunteers for their hard work. 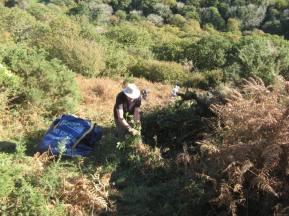 After a day’s work